HOW COULD WE??? A Petition to Change an Exclusionary Policy at the Midwest Horse Fair.

We at Spirit Horse Equine Rescue and Education Center would like to have a chance to be considered to give a demonstration at the Midwest Horse Fair. We'd also like for any other rescue organization to do likewise.

Midwest Horse Fair is the largest equine event in Wisconsin. Having this opportunity would allow us to reach so many people and further our dual mission of rescue and education in Natural Horsemanship.

So, how'd we get to this point? Long story, please stay with me!

When I founded Spirit Horse 10 years ago, I approached Midwest Horse Fair about having our horses in the coliseum building for a demo. I was told that rescues were not allowed to present. I was told that they were worried we would have photos and videos that could disturb the attendees. However, we were encouraged to pay to have a booth there. Hmmm...didn't make sense, since we could have disturbing items in a booth...but, we did it, given that I was also told that they "might change their policy in the future". Ok. Better to have some role than none, right? We had a booth there for 6 or seven years, but the policy toward rescues demonstrating did not change. We quit having a booth where our horses were not welcome.

In the past three years, we have been very proud to have been selected to participate in the HSUS' Forever Foundation. We've had the opportunity to study with Trevor Carter (past Road to the Horse winner) and we're very proud of what we've been able to accomplish with our equines. We've also been involved with the largest equine rescue in the history of the United States. We have adopted nine of the famed Hallelujah Horses....mustangs from a failed sanctuary in South Dakota.

BECAUSE, on the Midwest Horse Fair website it says: "Adoption-based organizations will not be considered for breed or discipline demonstrations." In an effort to learn more, I looked at the website of the owner of the Midwest Horse Fair, The Wisconsin Horse Council. On their website it states that their mission is: To represent and to foster a unified equine industry of Wisconsin.To promote the equine through leadership, education, service and communication.To take a pro-active role in the future growth and development of the equine industry. This mission statement seemed to directly contradict the policy of the Midwest Horse Fair.

In an attempt to discuss this seemingly discriminatory policy, I contacted Megan Hanuszczak, the executive director of the Midwest Horse Fair. She would not give me a reason for the policy, but told me that it was possible that they would reconsider the policy after this year's fair. THAT SOUNDED FAMILIAR. I fell for that ten years ago. Wasn't falling for it again.

I contacted the Wisconsin Horse Council. I asked what we needed to do to be able to present to the board of directors. I was told that because we were not members of the Wisconsin Horse Council, we could not attend a meeting of the executive board. I asked for contact information for officers and board members of the executive board because they were not listed on the website. I was told that information was not available to the public. I then inquired as to what we COULD do about addressing a policy. We would be permitted to attend our district meeting of the Wisconsin Horse Council. So, I contacted the president of our district, Karen Kroll, and she seemed unaware of the policy of the Midwest Horse Fair. However she understood why they might have it, because if they let in one rescue, they would have to let in all of them. Puzzled, I asked why. She explained that since we "all had the same thing to offer", it would not be possible to choose one over the other. I told her I respectfully disagreed that we all had the same thing to offer, and that IF we were allowed to apply for consideration, that might become apparent. Nevertheless, she said if I wanted to attend their upcoming meeting, she would give me an opportunity to speak to the group and hand out brochures.

Four of our board members attended the meeting. I had done more research and found out that two of the district members served as representatives on the executive board. During my presentation, I addressed those two individuals directly, requesting that they give us guidance as to how to proceed in our efforts to have the policy changed. They said nothing that night and we never heard a word from them.

At our next board of directors' meeting, it was decided that since all our other efforts had failed, a petition might be a way to get the conversation started.

Once the petition was underway, a reporter from the Milwaukee Journal Sentinel, Rick Barrett, became interested in the story. Shortly after Rick spoke with the Megan and the president of the Wisconsin Horse Council (I still don't know how he got to talk to Nancy Edwards when we couldn't.), several paragraphs were added to the Midwest Horse Fair website under the exclusionary policy:

"We apologize as we understand there may have been some confusion with the way this was worded. To clarify: All adopted and rescued horses are welcome at Midwest Horse Fair.

Individual horses, adopted or not, may apply for any of the different events offered at Midwest Horse Fair such as the Liberty Presentations, Ambassadors program, Clinic Participant, Grand March, or a competition such as the Youth Team Challenge.

Midwest Horse Fair has proudly offered a number of opportunities focused solely on rescue horses or horses up for adoption. On two separate occasions, the Mustang Makeover Challenge at Midwest Horse Fair brought in more than 30 mustangs to showcase the brilliance, resilience and versatility of the adopted mustang. The Chase the Equine Dream Challenge was an event that Midwest Horse Fair hosted exclusively for rescued horses. The competition highlighted the unique stories or rescued horses and gave them a friendly platform to show off their talents in an obstacle course challenge." (This was copied and pasted directly from the website of the Midwest Horse Fair. Any errors in it are theirs.)

This certainly looked to me like an effort to distract from the actual issue of rescues presenting on their own behalf. Listing all the activities we COULD do, and mentioning the paid presenters who worked with rescued horses has nothing to do with this. But it could possibly shift people into thinking, "Gee, they do allow some rescue horses at the fair". We do not wish to be a part of someone else's demonstration. And, after narrowing the definition of who could be a "main representative" for breed and discipline demonstrations, the possibility of the policy being changed appears to be a dead issue.

I have received no contact from anyone in an official capacity at either organization. Though I have received unofficial advice that what we are doing is "not making us any friends".

We remain resolved that EQUINE RESCUES DESERVE A CHANCE TO BE CONSIDERED FOR A DEMONSTRATION AT THE MIDWEST HORSE FAIR.

We would be delighted if someone from the governing bodies of the Midwest Horse Fair and/or Wisconsin Horse Council would want to sit down and meet with us about that. We will be crafting a letter to both organizations expressing that desire. We would truly love to see a UNITED effort on behalf of ALL EQUINES in the state of Wisconsin.

HOW COULD WE??? A Petition to Change an Exclusionary Policy at the Midwest Horse Fair.

Issues and Answers. It's Always the Horse. 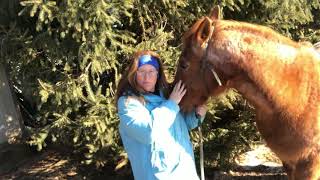 My Journey to Natural Horsemanship

Welcome to the Blog!